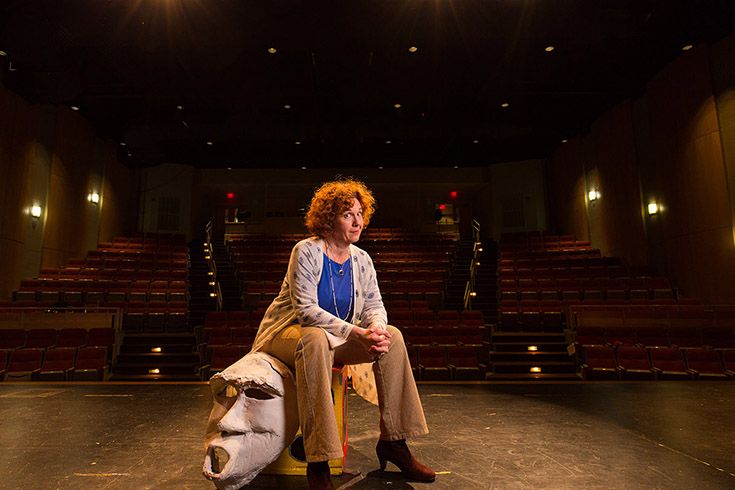 A native Rhode Islander, St. Andrew’s Arts Department Chair Joanne Fayan has been at home on the stage from the ripe old age of six. From dance performances and summer camp theater days to plays put on in her basement for neighborhood kids, Fayan has been entertaining since. “I was always performing,” she said. “I think I always knew I wanted to be some kind of performer, which is funny because I was a really shy kid. I still am shy!”
Having no exposure to the actual theater until her junior year of high school, Fayan went on to the University of Rhode Island, where she intended to get a doctorate in clinical child psychology. That all changed during her first semester, when she switched to theater. “It was a calling,” she said. “It’s in my soul, I guess.”
After graduating with a bachelor’s degree in acting, Fayan attended the University of South Carolina-Columbia. There, she apprenticed at The Shakespeare Theatre in Washington, DC, while working toward her master’s in acting. Back in Rhode Island after graduation — bookending a three-year stint as communications director at 2nd Story Theatre — Fayan devoted 13 years to All Children's Theatre in Providence, where, among other responsibilities, she helped to develop the company’s educational and artistic programs.
It was through All Children’s Theatre that Fayan was introduced to St. Andrew’s and, when the theater closed, this mutual connection led her to an opening in the institution’s arts department. As well as teaching theater classes and running the after-school and summer theater programming, Fayan led the theater department. Three years later, in 2012, she was appointed arts department chair.
Today, in addition to overseeing the arts department, Fayan teaches theater, intro to arts, and oral communications. “There’s just so much to be gained from the arts,” she said. “Creative expression, your own unique voice, empathy, a greater understanding of humanity, but also, in the performance world, the idea of ensemble, teamwork, self discipline, and motivation.” For Fayan, it’s also about storytelling. “Storytelling is as old as humans. It’s a part of who we are and I get to do it all the time with young people. It’s certainly a unique way of working,” she said.
Theater is both a professional and personal passion for Fayan, and seeing her students discover their own voices and face their fears is what it’s all about. “I’ve learned to give them space to discover or not discover,” she said. “When a student who didn’t think they could do something then does it, and you see the way it changes them, it’s phenomenal. For me to be able to witness that again and again and again, well, it drives me.”
Fayan has a very busy year ahead. In addition to a musical, a play (“Romeo and Juliet”), an improv and sketch comedy show, monologue contests, and a music recital, the department also puts on a holiday performance and art exhibits, including the senior show, which simulates a professional art opening. As if that wasn’t enough, she is also an actor at the 2nd Story Theatre in Warren, Rhode Island. “I have a one-woman show coming up in March called Shirley Valentine,” she said. “It’s my first one-woman show, so I’m a little nervous. But, I always tell my students, if I’m going to tell you to take risks, then I have to take them too.”